Euro under pressure from expectations for additional ECB stimulus

Financial markets worldwide are now focusing on upcoming central bank announcements this month both in the US and, more imminently, in the Eurozone.

At its most recent monetary policy meeting in January, the European Central Bank (ECB) fully validated our out-of-consensus expectation for further easing in the first half of 2016.
While ECB President Mario Draghi did not announce any new policy measures then, he strongly suggested that additional stimulus could come as early as the next meeting, which is this Thursday, 10 March.

Draghi claimed that the outlook for inflation had worsened ‘significantly’ since their December meeting, in line with the latest plunge in global oil prices. He also expressed concerns over ‘second-round effects’, including falling wage pressure, with the China-induced volatility in global financial and commodity markets increasing downside risks to the Eurozone economy.

Draghi has reiterated that there are ‘no limits’ to how far policymakers are willing to act within their mandate, with the ECB to ‘review’ its existing stimulus programme at this next meeting.

Anticipation of further monetary easing in the Eurozone has already sent the Euro 4% lower against the US Dollar since mid-February (Figure 1). 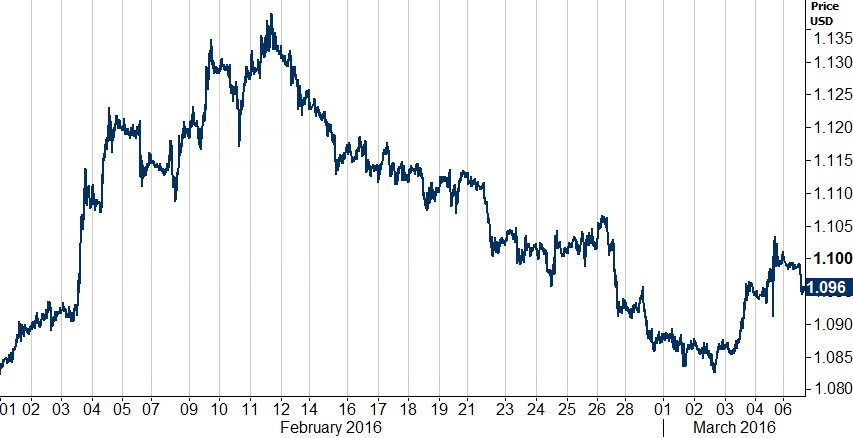 The bounce in the common currency in the first half of February was mostly due, in our opinion, to the heavy overhang in long Dollar vs. Euro positioning in financial markets. Once these were cleared up, there was little to prevent the resumption of the downward trend in the Euro.

Since the January ECB meeting, Eurozone economic conditions have continued to worsen. The Eurozone slid back into deflation in February after headline consumer price growth plunged back below zero to -0.2% for the year. The more stable core inflation measure also fell an unusually large 0.3% to just 0.7% (Figure 2), while producer prices remain deep in negative territory.

The key PMI business sentiment indicators have all dropped for three consecutive months. The composite index declined to 52.7 last month, its third consecutive drop. These indexes are perhaps the most accurate indicators out of the Eurozone and their poor performance will certainly strengthen Draghi’s hand against Bundesbank hawks at the upcoming March meeting.

We are in line with the consensus view that the ECB will ramp up its monetary stimulus measures at its meeting on 10 March. We expect an additional 10 basis point reduction in the deposit rate, already negative at -0.3%, with the strong possibility of an expansion in the existing 60 billion Euros a month quantitative easing program. We may perhaps also see measures to support the banking system from a regulatory and capital needs perspective.

The recent stream of negative economic news, together with dovish comments from President Draghi, has meant that additional ECB easing this month is now fully priced in. A lack of action will be seen as a severe disappointment and put significant upward pressure on the Euro, which is the last thing the Eurozone needs at this juncture.

We don’t think Draghi can afford to disappoint markets. Therefore, we expect the Euro to finish significantly weaker against the Pound and lower versus the US Dollar, reaching parity at some point in the third quarter of this year.

Thursday’s ECB meeting poses a serious risk and in response many Financial Managers have been hedging their EUR/USD exposure.