G10 CURRENCIES OFF TO A VOLATILE START IN 2016, US DOLLAR AND STERLING PLUNGE

G10 currencies have been quite volatile so far in 2016 and not necessarily in line with the stances of their countries’ respective central banks or economic fundamentals.

Here are a few key findings:

Financial markets are not even pricing in one Fed hike this year and, as a result, the US Dollar has fallen across the board, suffering its worst quarterly performance in six-and-a-half years.

Central banks in Japan, New Zealand, Sweden, Norway and, most notably, the Eurozone have all cut their interest rates so far in 2016. In spite of this, every G10 currency, barring Sterling, ended the first quarter higher against the US Dollar.

Sterling has fallen 5% in trade-weighted terms. Uncertainty regarding the EU referendum in June is dominating national newswires, with opinion polls changing significantly week on week.

Oil prices have stabilised so far this year, rallying back above $40 a barrel in March. As a result, the commodity-driven Norwegian Krone and Canadian Dollar have recovered from their recent multi-year lows. 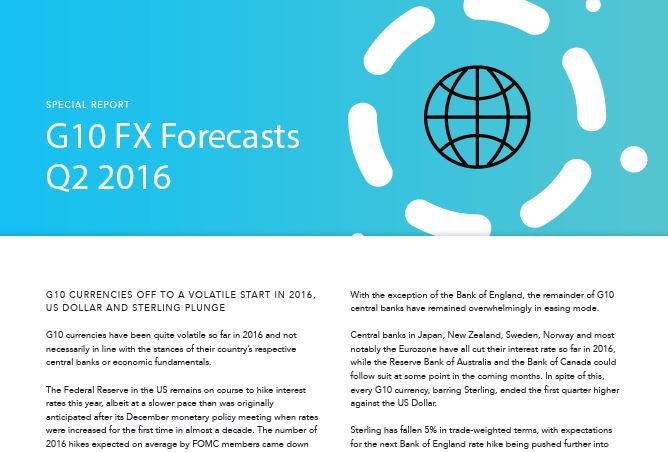 Fill in the short form below to get the full report.

Marketing Executive at Ebury. English Literature graduate from the University of York and a motivated professional.